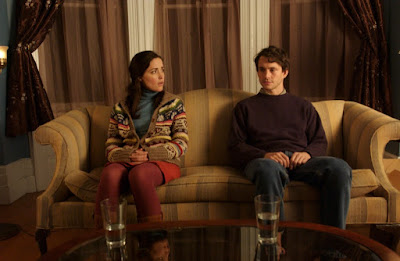 At the risk of summoning the adjective police, Adam is a poignant, vibrant and evocative movie. It's the story of a man named Adam (Hugh Dancy) who has Asperger Syndrome and lives a quiet, highly structured life in Manhattan. Not long after his father dies, Adam meets Beth (Rose Byrne), an elementary school teacher/children's book writer, and a truly unique relationship forms. One of the more refreshing movies of late, particularly because its characters aren't caricatures or stereotypes. They have a little more mystery to them and a lot more honesty. Of course I was thrilled to see Amy Irving in the film, even if the part--as Beth's mother--was fairly small.

The entire movie is beautiful--beautifully shot and featuring gorgeous locations of New York (and California, briefly). Likewise, the soundtrack is terrific (both the instrumental score and the lovely folk-pop songs that intermingle with it--I thought I heard Leigh Nash singing in the end credits but it turned out to be someone else). Do check out this little film. It didn't seem to make much noise (although it got some recognition at the Sundance Film Festival), but amidst a lot of noisier, flashier films, this one is worth listening to and looking at.