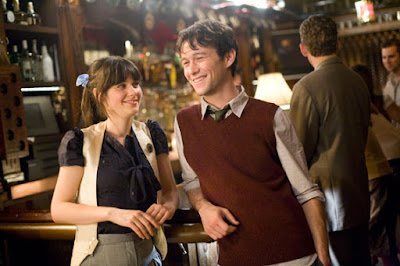 The timing of my viewing of (500) Days of Summer worked out nicely following a "screening" of Adam. Both are movies about love, even though the former defiantly states the contrary during its opening minutes. Whether or not that statement was a marketing technique or an attempt to stand out from its genre matters little since (500) does stand out in some ways, particularly because its main character is a male. Joseph Gordon-Levitt plays Tom, a young man who writes greeting cards for a living in Los Angeles. Tom believes in true love. Then he meets Summer (Zoey Deschanel), who doesn't. A relationship buds, although Summer hesitates to define it beyond friendship--with benefits (great dental plan, long-term sick leave, that sort of thing).

Roger Ebert argues that Adam wrapped things up too nicely, and after reading his review of that film, I agreed with him. Perhaps the ending came about too easily, but this flaw was mitigated because the ending was unconventional. (500) too is unconventional in some ways, yet it surprisingly left me a bit irritated, and relieved that the movie was over. Despite (or maybe because of) Tom's utter niceness and his pouting face, I wasn't all that interested that the movie seemed to be all about him and his problems, wants, and needs. The lesson he learned was perhaps inevitable, delayed because the filmmakers chose to give us a sort of non-linear linear story. Yay, Tom. Summer realized you were right all along that there is true love, and GO TOM, you can find another girl...

There were a couple of standout moments: the scene where Tom's diabetes-inducing love-happiness results in a song and dance routine was quite funny (and perhaps those of you familiar with Fletch Lives were reminded of a similar scene in that film involving rosy expectations and the incorporation of music and cartoon bluebirds). Joseph Gordon-Levitt is a good actor, and I think he and his counterpart did a nice job. The film itself leaves me feeling ambivalent. It was such a contradiction of itself (and perhaps rightly so): both whimsical and cynical, modern and old-fashioned, and carried on the new cliche of splicing indie-folk-pop songs intermittently with its own score (which Adam did as well). Watch them both and compare.

(500) Days of Summer... This is movie that I cannot make up my mind about. For the most part, I enjoyed it (especially the dance int he park to some good ole Hall & Oates). It was a little quirky and unusual and as cliche as it is, I enjoyed the soundtrack. The one problem I had was that my hopes were dashed because I was looking for a more realistic ending.

By the end of the movie, I was annoyed with Tom for being such a sap and ticked off at Summer for switching camps. Call me cold-hearted (perhaps) or ridiculous, but I just can't stand a movie that promotes itself on being unconventional when it turns out to be nothing but the same old story (fated meetings, love at first sight, etc.) with a detour or two.

Perhaps because the movie essentially lies at the beginning, and then delivers a heartfelt treatise on the fake messages that are manufactured by greeting cards and other industries that produce entertainment for mass consumption (cough...Hollywood... cough). That said, this movie made me yearn for more old-fashioned Hollywood entertainment, where movies were content to be just fun...and not so worried about making a statement about love or fate.

I recently read someone's review of Away We Go that characterized the problem of current American indie films as "banal, self-important nothingness." That struck me as very true, even of the films I liked that were "indie." In their attempt to run from the high drama or the other "cliches" of Hollywood they often have no real story, just a sort of random glimpse into people's bland lives. Sometimes I'm interested by that, other times I would rather have a movie that was about something.

The first time I saw this movie, I was annoyed with Summer. How could she jerk Tom around? And what were the odds that after being SO anti-love she would meet, fall in love with, and marry a guy in just a few months?

The second time I saw it, I was so fed up with Tom. He seems more in love with the idea of Summer than anything. When her quirks start to emerge, he is surprised: "no one's favorite Beatle is ringo." He wants to lounge in bed and hear Summer's stories not because he wants to really get to know her but because it makes him feel special.

Really, though, I like the way this movie leaves me annoyed with both characters. And I like the way they both change, especially Tom (because, like I said before, I still think Summer's shift is slightly unbelievable, though the romantic in me still kind of buys it...) He actually takes the risk of pursuing his architecture dream.

Random asides:
-The film is definitely a product of its time. As you said, "It was such a contradiction of itself (and perhaps rightly so): both whimsical and cynical, modern and old-fashioned." But this is where we are right now: Sex is nothing, sex is everything. True love is a lie from Disney, true love will fulfill you.

-One of my favorite characters is Paul, the quintessential truth-speaking fool.

-The gender roles in the movie are super-interesting to me. Tom is so the over-analytical, obsessive, read-into-everything girl. And in the words of Tom's friend, "she's a dude!"

sorry to write a treatise... enjoyed your review