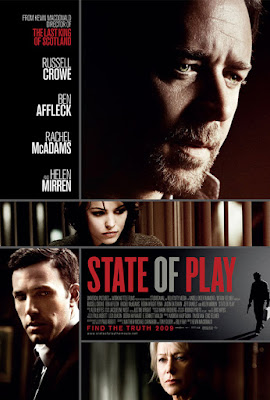 State of Play didn't seem to get much notice back in April, but it ought to have. It's an absorbing political thriller in the vein of director Alan J. Pakula's films (All the President's Men, Klute, and The Pelican Brief), based on a 2003 British TV mini-series. Russell Crowe heads an impressive cast as a reporter for the Washington Globe whose old buddy, a U.S. Congressman (Ben Affleck) becomes the center of a scandal when his aide and mistress dies suspiciously in a subway station.
The congressman's investigation of a large and insidious corporation which has its financial fingers in the cookie jar of the War on Terror seems unrelated to this apparent accident, at first. Crowe and a newbie reporter (Rachel McAdams) whose job as a blogger for the Globe he resents, must band together in their search for the truth, fighting reticent political figures, creepy mercenaries, and the ticking of the media clock.
Well-timed and appropriately suspenseful fun with more than a few pertinent plot points (such as political scandals, the War, and the current transitory nature of newspaper media and its relationship to the blogosphere). Helen Mirren gives a wonderfully bitchy performance as Crowe's editor, and also starring Robin Wright Penn as Affleck's disgraced wife, also a long-time friend with Crowe.

So far, I would certainly add this to my favorites of the year. ★★★
by Jacob Lusk @ pannedreview
Email ThisBlogThis!Share to TwitterShare to FacebookShare to Pinterest
Tags 2009, Ben Affleck, Helen Mirren, Jason Bateman, Kevin Macdonald, Rachel McAdams, Robin Wright, Russell Crowe