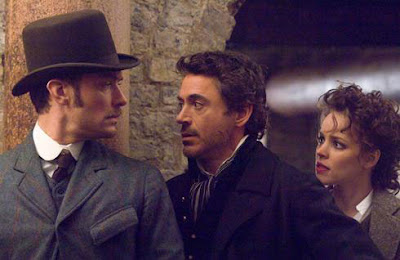 "'My dear fellow,' said Sherlock Holmes, as we sat on either side of the fire in his lodgings at Baker Street, 'life is infinitely stranger than anything which the mind of man could invent.'"

-from "A Case of Identity," The Adventures of Sherlock Holmes by Sir Arthur Conan Doyle.

As the saying goes: "Don't kill the messenger." The latest incarnation of Doyle's immortal British sleuth (Robert Downey Jr. here, upon whose performance and casting choice I remain undecided) is big and booming and loud...and a bit limp amidst all the frenzy of action, explosions, and the like. Perhaps Guy Ritchie was the wrong choice to direct this film. I found its scale disappointingly large, with all the more room to fall given its self-conceived grandeur. The mystery was less than mesmerizing in its attempt to cash in on the magic motif that has served other blockbusters so well of late. I have read some Sherlock Holmes, including the volume of short stories from which the above citation comes, as well as the classic novel The Hound of the Baskervilles, and I could never have imagined the behemoth that took place on screen coming from the pages of Doyle's work.

That said, the movie isn't terrible, just average. Good performances, particularly a well cast Jude Law as Holmes's amiable chum Dr. Watson and Rachel McAdams as a scheming American with whom Sherlock feels a slight romantic affection, made the film less irritating. However, there are just so many ridiculously unbelievable brawls and chase scenes and explosions one can manage. At just over two hours, the film should have been a lot more fun without trying so hard, and the mystery should have been more spine-tingling and less a pastiche of magical villains, superhero movies, and doses of the occult (which could have been explored with more historical perspective and curiosity given Victorian England's fascination with the subject).

The script was laced with humor, eliciting fairly frequent laughs; unfortunately the film was either too gimmicky and cartoonish or too reminiscent of something from Marvel comics. I was waiting for Dr. Watson to caution Holmes that old adage, "with great power comes great responsibility." Indeed. ★★
by Jacob Lusk @ pannedreview
Email ThisBlogThis!Share to TwitterShare to FacebookShare to Pinterest
Tags 2009, Guy Ritchie, Jude Law, Mark Strong, Rachel McAdams, Robert Downey Jr