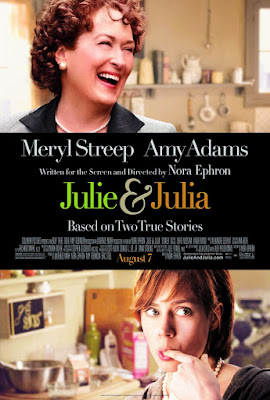 Julie and Julia is probably the warmest film of the year, and Amy Adams is quickly becoming one of my favorite actresses. Meryl Streep was terrific as the famous cooking expert Julia Childs, but I found Adams's story much more enthralling while Streep's half of the movie seemed sort of breezy. Indeed, the fun of watching Meryl Streep and Stanley Tucci was enough to propel their portion of a film which is split into into separate stories of women in 1949 and 2002 respectively: one, a burgeoning culinary icon studying the art of French cooking in Paris, the other a devoted follower living with her husband in Queens, who decides to cook her way through Childs's French cookbook in one year--which she documents on her blog--and which soon becomes an obsession.
It went on a bit longer than it should have, but it was definitely a feel-good kind of movie, an ode to food (what's not to like about that, after all?) ★★½
by Jacob Lusk @ pannedreview
Email ThisBlogThis!Share to TwitterShare to FacebookShare to Pinterest
Tags 2009, Amy Adams, Chris Messina, Jane Lynch, Meryl Streep, Nora Ephron, Stanley Tucci

That's interesting that you found you liked Julie's part of the story better. I thoroughly enjoyed the Julia Child story and found myself bored during Julie's part. The movie was great, if a little long.