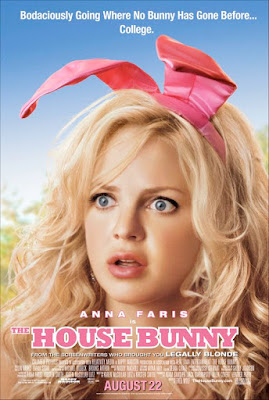 In my quest to watch the noteworthy films of 2009, I inadvertently drifted back to 2008 and landed upon The House Bunny: the feel-good sophisticated comedy of the year! Or, perhaps the opposite. Let's be honest, no one goes to a movie starring Anna Faris (star of all the Scary Movie flicks) for her keen wit or comic bravado. She is, however, a funny actress (although she may be stuck in a rut playing the dumb girl for longer than she should). The House Bunny starts, proceeds, and ends, predictably enough: narcissistic and shallow but likable Playboy bunny Farris is ejected (rather suspiciously) from the Playboy Mansion (it may help to liken this to Nixon's self-imposed abdication of the White House) and forced to make something of herself.

She inadvertently winds up in a college town and discovers that being a "Housemother" to a sorority might be a pretty good gig for a girl whose only real talents are dressing in skimpy outfits and acting stupid to attract attention from guys (and envy from girls). Happening upon the fledgling Zetas, Faris offers to help them gin up their image and increase their non-existent recruitment (a problem which threatens the loss of their house). What is the answer to their sorority woes, you ask? Shredding their geeky appearances, social awkwardness, and smarts for sexy attire and superficial giggly-ness. Nothing that an out-of-work Playgal can't handle! Indeed, they transform from the caterpillars no one would talk to, to the butterflies everyone's talking about. The seemingly contradictory lesson? Beauty is on the inside (wow, HOW original). Of course, a rockin' hot bod helps too, giving you the audience to demonstrate your erudition and individuality.

It's always fun when shallow and sexist movies attempt to redeem their entire plots by offering a predictable but palatable message. Problems: Why would girls like this even WANT to be in a sorority if the other sorority sisters are so vapid and vain? Also, why would they want to change into something they aren't? The film (I often throw this high-brown term around like Paula Dean throws sour cream on butter) tries to present to us the idea that women can be both hotties and brains, like, at the same time, for real! ★★
by Jacob Lusk @ pannedreview
Email ThisBlogThis!Share to TwitterShare to FacebookShare to Pinterest
Tags 2008, Anna Faris, Emma Stone