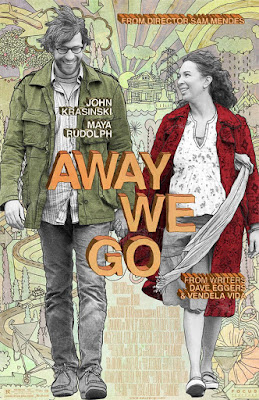 I had heard much praise of Sam Mendes's little change of pace, Away We Go, and I wasn't disappointed. It is the story of a couple in their early 30's experiencing the fears and joys of becoming parents for the first time, a change that triggers a deep yearning for roots and some sense of belonging. In a culture of seemingly constant mobility, Away We Go captures the scattered sense of community that so many people have. Amidst their voyage from Arizona to Wisconsin to Montreal to Miami and eventually to her childhood home along the Mississippi River, our weary but persistent heroes (John Krasinski, Maya Rudolph) encounter the struggles of their friends and family, seemingly taking mental notes along the way: of what not to do, what to do better, differently, the same, etc. The little vignettes, divided by location, offer some wonderful performances by such fine character actors as Catherine O'Hara and Jeff Daniels (Krasinki's parents), Allison Janney (Rudolph's outspoken, crazy former boss who enjoys the shock value of her demeanor and calls her own daughter a "dyke"), and a particularly amusing performance by Maggie Gyllenhaal as an old family friend of Krasinki, who is the epitome of the trendy modern-day hippy. I found this movie refreshing in its examination of modern values: it doesn't seem to have an axe to grind, and is instead content to simply let its characters find out things for themselves. ★★½
by Jacob Lusk @ pannedreview
Email ThisBlogThis!Share to TwitterShare to FacebookShare to Pinterest
Tags 2009, Allison Janney, Catherine O'Hara, Chris Messina, Jeff Daniels, John Krasinki, Maggie Gyllenhaal, Maya Rudolph, Paul Schneider, Sam Mendes

I loved this movie. Great movie. Great soundtrack. Maya Rudolph was one of my favorites, as was John Krasinski. I have really only seen them on TV (SNL and the Office, respectively), so it was a big change to see them in Away We Go.