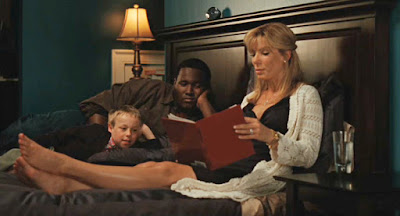 Football movies. They have emerged as a genre within themselves. As a non-sports fan, I tend not to express much interest in them, even though I have enjoyed the few I've seen (Remember the Titans and We Are Marshal come to mind). The Blind Side works because it's not the same old story about a team coming together and winning, but a close-up into the story of one individual, a shy, overlooked youth nicknamed Big Mike who is slipping through the cracks in every way imaginable until he finds an unexpected friend in Sandra Bullock, a wealthy, tough and funny Southern woman with a husband (who owns 85 Taco Bells) and two kids. Bullock has never been better, and director John Lee Hancock generally avoids indulging in too much sentiment, preferring to keep things a little more stable and realistic. The film is emotionally charged enough without sacrificing restraint. I was also impressed by Quentin Aaron's performance as "Big Mike" (Michael Oher, a real-life football player, as it turns out), whose performance relies much more on the subtleties of facial expressions and movement than on dialogue as he struggles to come out of his shell. Tim McGraw plays Bullock's husband, and Jae Head steals the show as their rambunctious and intelligent son. Very funny and poignant. ★★★
by Jacob Lusk @ pannedreview
Email ThisBlogThis!Share to TwitterShare to FacebookShare to Pinterest
Tags 2009, Sandra Bullock

I really want to see this movie. Though, I was a little hesitant at the thought of seeing Tim McGraw in a movie. Sometimes the gap between musician and actor just CANNOT be bridged.