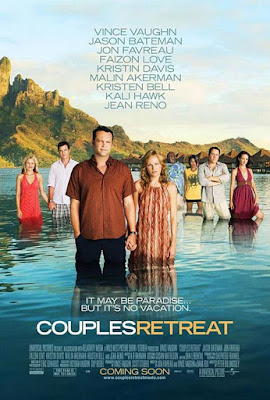 I enjoyed it. Not a laugh a minute or anything, but very entertaining. Four couples are guests at a resort called Eden, where their specialization is in couples therapy. In an effort to get the group rate, Jason and Cynthia (Jason Bateman and Kristen Bell) coerce their friends into joining them for the weeklong pleasure vacation/therapy session. The other couples are content to enjoy themselves while their friends work out their marriage problems, but it becomes clear that no one's "house" is in order. Couples Retreat is funny and enjoyable but never really peaks comically. Perhaps this is not something it even attempts, and that didn't bother me much. I was intrigued enough to want to know what would develop between the various characters. Where the movie did not succeed was in developing real, adult problems that it was apparently unwilling to really solve (this is supposed to be a comedy, after all), so the resolutions were happy but not necessarily believable in that they happened too fast and somewhat unrealistically. The exceptions were Vince Vaughan and Malin Akerman's characters, who realized (I am paraphrasing): "we don't have a problem. We have LOTS of problems. And maybe that's okay." Couples Retreat may pretend to offer profundity without doing so, and this makes it somewhat more subtle (in spite of the often crude humor that may or may not affect one's enjoyment of the movie). ★★½
by Jacob Lusk @ pannedreview
Email ThisBlogThis!Share to TwitterShare to FacebookShare to Pinterest
Tags 2009, Jason Bateman, Jon Favreau, Kristen Bell, Vince Vaughan