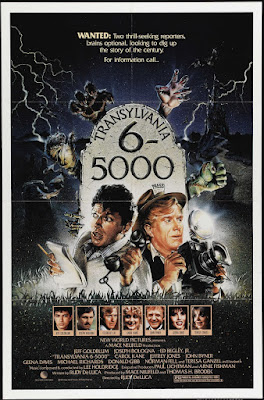 Come to think of it, it was a bad movie. I rented Transylvania 6-5000. I had read the crummy reviews, but held out a tiny seed of hope that in spite of its critical scorn, the movie would hold some amusement. I tend to enjoy lame horror-comedies if they're at least entertaining (i.e. fall into the so-bad-it's-good category). One would expect at least a few laughs with a cast including Jeff Goldblum, Ed Begley, Jr., Michael Richards, Geena Davis, and Carol Kane. However, one would expect in vain. The script by first-time director Rudy De Luca (of the Mel Brooks School of Comedy) was just awful. I am a fan of even Mel Brooks' mediocre efforts (with the exception of the abysmal Life Stinks), but it seems his proteges fail to rise to the level of even his least successful offerings. Something just doesn't work. You know a script is bad when you can imagine yourself writing it (unless you're Joseph L. Mankiewicz). The plot, about two reporters going to Transylvania to track down a wanna-be Frankenstein, is hair-brained enough, reduced to one of the most inept, unfunny attempts at schlock-comedy ever beheld on screen. ★
by Jacob Lusk @ pannedreview
Email ThisBlogThis!Share to TwitterShare to FacebookShare to Pinterest
Tags 1985, Geena Davis, Jeff Goldblum