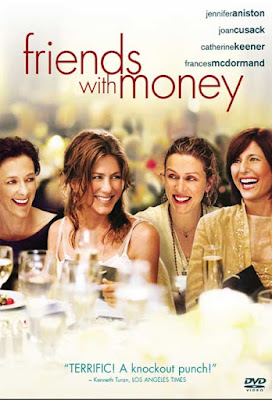 Jennifer Aniston is a good actress but she seldom seems to get THE part. Usually we see her in a romantic comedy, in which she's clearly comfortable--and likable. But occasionally she gets to demonstrate her dramatic chops, like in this movie, Friends With Money. I found it in the comedy section of the video store, but I thought the categorization misleading. It's one of those movies where you feel like you're being a told a story completely objectively, just watching the lives of four women and their husbands unfold in a small splash of time. Aniston's character, Olivia, is single and has become a maid after quitting a teaching position she hated. Her three friends (played by Catherine Keener, Joan Cusack, and Frances McDormand), are all married and financially well-off. Olivia is, in many ways, their pet project. She's the one they're "a little worried about."
This is the kind of movie where conflict resolutions aren't necessarily inevitable, in that it's a movie that tries to be realistic. If you hate that sort of thing, you might not enjoy this, but if you do enjoy it, like I did, you'll find a very clever, honest, sympathetic picture that's about the intricate, unstable, chaotic, and familiar nature of relationships. ★★★
by Jacob Lusk @ pannedreview No comments:
Email ThisBlogThis!Share to TwitterShare to FacebookShare to Pinterest
Tags 2006, Catherine Keener, Frances McDormand, Jennifer Aniston, Joan Cusack, Nicole Holofcener 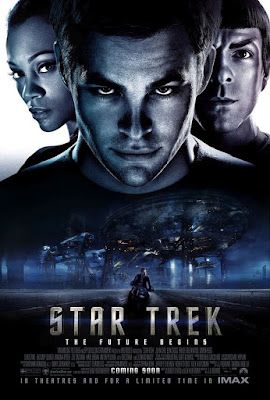 I have never seen any of the other Star Trek films in their entirety, although I remember watching part of the first one in school a long time ago. So, I did not have a lot of expectations or foreknowledge about the most recent incarnation of this incredibly long-lasting storyline.

It's been a while since I've really enjoyed a movie like this. It pulls you in immediately, but not simply because of astonishing visual effects, but because from almost the first moment the audience is able to care about the characters, even ones who have very little screen time.

Without a doubt, Simon Pegg's portrayal of Scotty was the funniest part of the movie.

He came in kinda late, and you could instantly see the difference with his comic appeal. Meanwhile, however, the story is momentous and absorbing enough to maintain itself all the way. Most space epics seem to run out of steam, but I was glad to see that the new Star Trek carried its weight.

What was really amusing about Star Trek 2009 was observing how much it clings to the past in spite of its attempt to be hip. I'm really not trying to criticize the story at all--again, it was thoroughly engrossing--but you can see how much its roots are in the 1960s with those Vulcan haircuts and goofy sayings (a la "live long and prosper.") I think my favorite was the emotionally charged exchange between Uhura and Spock: "I'll be monitoring your frequency!"

Note that this is J.J. Abrams' feature directing debut. Up until now, his directing work has been confined to television shows. I think he made a fairly smooth transition, although one of the things that bugs me about many of today's movies is a lack in directorial style. Sure, special effects can be effective, but only the style of a director can make a movie special.