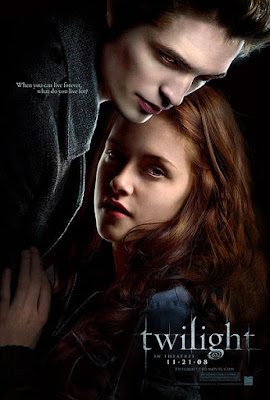 I was roped into watching Twilight, the film based on the novel by Stephanie Meyer.
I’ll admit I was gunning for this movie from the beginning, but I think that if it had been a good movie it would have won me over. Instead, I kept wondering when it would end. It felt like watching the WB. It felt like watching rain fall. It felt like bad writing and unimaginative filmmaking. Actress Kristen Stewart (Bella) only has three acting techniques: scrunching up her face, looking around (at anything but at her boyfriend), and not smiling. Robert Pattinson’s character Edward is, of course, far more interesting. In fact I must sympathize with Stewart for having such a boring role.

Having watched numerous other vampire films, it’s hard not to compare Twilight to those I thought offered similar themes with much more humor and imagination. I think one of the biggest problems of the movie Twilight is that it fails to offer characters who grab the attention of the viewer. The villains seem like an afterthought. They appear near the end with very little prior introduction, except a rather tame “feeding” scene where their quick movements are demonstrated by some obvious computer graphics.

Meanwhile, the budding romance is a little too tried and true, and a little too Jack and Rose. The only thing that’s missing is an unsinkable ship. It seems to easy, Pattinson’s whole “I’m pale, I’m dark, don’t love me” argument. And of course Stewart can’t help but fall for that old line, leaving the nice guys out in the cold. There was not enough at stake (if you’ll pardon the pun), for the romance to be of much import. And the film wasn’t scary or suspenseful enough to work on a horror-film level. ★★
by Jacob Lusk @ pannedreview
Email ThisBlogThis!Share to TwitterShare to FacebookShare to Pinterest
Tags 2008, Anna Kendrick, Kristen Stewart, Robert Pattinson, Taylor Lautner

I definitely think the the books and movie are probably not for somebody who loves vampire lore. Or guys, for that matter. The movie is really not as good as the book. I think that you might find the series worth reading, but sounds like after seeing the movie you probably won't read them. Still I'd recommend it.

And concerning Bella's character, again, if you haven't read the books I can see how her character could be annoying. She is described in the books as a very introverted, shy, average, and awkward teenager. I would argue that most of the girls reading the books (myself included) identify very much with a character like that. I think that is part of what has made the series so popular- Edward, a beautiful vampire (who, as you read on, is really a good guy) falls in love with her despite her flaws. And vice versa. Like I said, the story is a love story more than it is a vampire story.

Jack and Rose never gets old to us girls. Something about the forbidden love... anyway, enjoyed the review. As you can see I'm a die-hard Twilight fan. Seriously, read the books!!! :)

I agree with Nat that Bella's character is much much more appealing in the book. Kristen Stewart seemed a little too pretty and self-assured to bring to life the bumbling teenager.

That said, the book has its own issues. (and I say "book" because I have only read the first one, so I'm not qualified to comment on the series as a whole... someday) I got to the point where I was ready to throw it across the room if I read the word "exhilarating" or "throb" one more time. Cheesy and creepy all at once. I'm a hopeless romantic but I would argue this is a lust story, not a love story at all. If you think the long shots of Edward's face and zooming in on love-struck eyes was corny in the movie, just read the book. I think I have a high tolerance for sensuality in books (blame a lit degree for desensitization) but this book disturbed me for what it's teaching girls (and really young girls, at that... because the reading level is not hard at all) about boys and love and fulfillment. Of course, Twilight is not the only thing broadcasting such messages. And the whole vampire thing does bring up interesting questions about good and evil. But as you put it, there are much much better vampire movies/books out there.

Positivies, though: I love love love Alice. In the book, she was my favorite character and I thought casting was perfect for the movie. I wish we got to know her better... I guess I should finish reading the books.

Sarah, you get to know the Cullens a lot better in the rest of the series- you will love it! In terms of it being a lust story (which I completely agree with), it does move on from teenage infatuation to a more mature kind of love, so they don't continue to be quite as annoying. I was actually really frustrated with the books until it got beyond that point. I'm really frustrated though that young girls are reading these books.