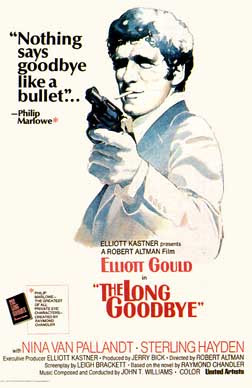 The Long Goodbye (1973) At first glance this belated film noir, a tongue-in-cheek adaptation of the novel by Raymond Chandler, seems like an inferior installment in a long tradition of hard-boiled detective thrillers. It doesn’t go for the swaggering style of its 1940s ancestors. It’s pre-Chinatown and The Late Show, and those two mysteries echo this one’s detached, hardened tone. Elliott Gould is not Humphrey Bogart, but that is not necessarily a bad thing.
I wasn’t thrilled by Gould’s incessant mumblings to himself, whether or not this is a nuance of character Gould was going for or just a learned acting trait, but what I think Gould did well for the character of private eye Philip Marlowe was to give him a sense of isolation from the world. The camera seems distant from him too, making the viewer not so much a Dr. Watson type tag-along as a curious bystander, a voyeur tripping along at Marlowe’s heals as he pursues a handful of loose ends with a dull pair of scissors.
In a 1940’s film noir there is a sense of moral obligation supported by society. A 1970’s Philip Marlowe seems to be stubbornly clinging to that moral obligation (without knowing why) in spite of a society that has grown rampantly apathetic around him. Marlowe lives in an odd-looking apartment complex hoisted high over Los Angeles, his neighbors a handful of dippy young flower girls baking brownies with weed. His one friend is a glorified acquaintance whose behavior at the beginning of the film gets Marlowe into more trouble than he bargains for, with an insane author, his young, seemingly tortured wife, and an easily unhinged gambler who’s trying to collect a load of cash with which Marlowe’s friend has absconded to Mexico.
The best image from the film occurs near the end, of Marlowe walking alone in Mexico, on a dirt road lined with trees, Spanish guitars playing as if looming overhead. It reminded me that private eyes have always walked alone. Years ago there was a chance, a tease at some kind of romantic link to normalcy. Now, a sobering realization that Philip Marlowe must take all these roads alone to do his moral duty (which turns out to be ironic in this film). ★★★
by Jacob Lusk @ pannedreview 2 comments:
Email ThisBlogThis!Share to TwitterShare to FacebookShare to Pinterest
Tags 1973, Elliott Gould, Robert Altman
Newer Posts Older Posts Home
Subscribe to: Posts (Atom)